Deprecated: Function get_magic_quotes_gpc() is deprecated in /home/customer/www/thorntoncleveleyscc.co.uk/public_html/libraries/cegcore2/gcloader.php on line 63
 History

Members of three church clubs namely St Andrews Parish Church, Cleveleys, Wignall Methodist Church and Fleetwood Road Methodist Church both in Thornton founded the Thornton Cleveleys Cricket Club in 1937. These clubs played in the Fylde Sunday School League but when it was disbanded around 1936 the three clubs decided to join together and successfully applied for membership of the newly formed Fylde League. As their new ground was not ready the first season was played at Thornton Cleveleys Rugby Club using matting for a wicket. 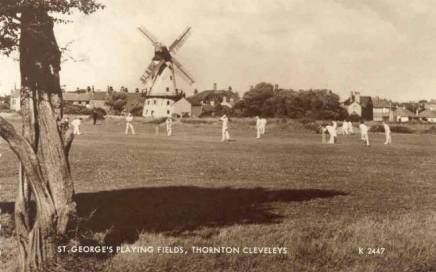 The following year the club moved to their new ground on the field next to the present sports centre at King George’s playing fields on Victoria Road. At this time the club supported three teams. The 1st and 2nd XI’s played their league games on a grass wicket prepared by the council whilst the 3rd XI played friendlies on an adjacent field, once again using a matting wicket. Prior to the Second World War the pavilion was in the garage of the nearby Ashdell Café. Each week forms were carried out to the playing are.

After the war the air raid shelter on the edge of the field became the new pavilion and changing rooms. In 1940 the club was admitted to the Palace Shield competition but with many players away on war duty there were no league fixtures. The club was kept alive with a few of the older members together with a sprinkling of “Norcross Londoners” playing against friendly opposition. At this time in the clubs history a well known local celebrity was turning out for the club. Roy Castle was a regular member of the 2nd XI who was a very competent all-rounder. Unfortunately due to his stage commitments on a Saturday he would have to leave the field early but he would always bring his trumpet and tap shoes so he could dash straight off (hmm, not much dedication there!!!!).

In 1949 the ever-succesful and highly-praised Ladies Committee was formed. The first officials were Chairlady: Bobby Holt, Secretary: Margaret Hargreaves and Treasurer: Betty Wood. Since that day the Ladies Committee have thrived and have continued to be a mainstay of the club. They have also been acclaimed as "the best teas in the league!" not least by Great Eccelston's Bob, who used to visit the ground on his trusty moped for a cream cake or two!

The club is indebted to the foresight and initiative of Tom Crelling, a past Chairman and President. In the early 1950’s, as a practising physiotherapist, he was treating Sir Frederick Emery JP, ex Member of Parliament for Salford and Mill Owner, who lived at the Illawalla in Little Thornton. It was during these treatment sessions that Tom persuaded Sir Fred to lease the land overlooking the River Wyre for a period of sixty years at a peppercorn rent of £5.00 per annum.

In 1957 the club moved from its ground on St George’s field to the present ground at Illawalla. Within 18 months, and with the help of a £700 grant from the Playing Fields Association, members had erected a timber pavilion and worked on the land to turn the meadow into one of the nicest places to play cricket in the county. When the 1st XI eventually was elected to the then Division 2, promotion and relegation was not automatic, however it did enable the club to enter a 2nd XI into the then Division 3 in 1960 Since the Fylde Leagues formation the club were members, however with the introduction of the 2nd XI into the division 3 they were forced to withdraw. However as the club became more renowned its membership increased and a 3rdXI was set-up and entered back into the Fylde League in 1961.

In the minutes of a club meeting in March 1961, it tells of a discussion by the committee as to the setting up of a bar at the clubhouse. It was decided, unanimously, that a bar would attract undesirables to the ground and therefore no bar facilities would be built, however this motion was overturned at the AGM of 1963 when members voted, all be it narrowly, in favour of adding a bar. This facility has been an integral part of the club's structure ever since.

In 1967 the ground hosted a testimonial game for Geoff Pullar. This brought an all-star side to Illawalla. Players such as Ken Grieves, Malcolm and Jim Hilton as well as West Indian test players Clive Lloyd and Sonny Ramadhin. In 1973 the club had its first venture in to the Lancashire Cup playing a team called Laports of Widness and in 1974 the 1st XI won the Palace Shield Competition for the first time in its history. Over the years the club as had many success with all three teams winning their respective cup competitions and the 2nd and 3rd XI’s also wining their leagues. From 1957 until 1982 the club gradually made improvements to the ground, the wicket and its buildings. Since 1983 great strides have been made on all fronts. A brick extension was added to the rear of the wooden pavilion. With the bar, pool table and a dart board players were encouraged, along with their families, to use the clubs facilities. Functions were possible and the club became, not only thriving place for cricket but also and enjoyable place for a social gathering. New brick changing rooms were built with the assistance of Manpower services and this was followed by the demolition of the old wooden score “hut” and the building of an all-new brick score box. All made possible by the hard work and intensive labour of a small number of members giving up their time and money for the club.

The future of Thornton Cleveleys Cricket Club was secured in 1997 when, with the help of a Lottery Grant, the lease of the ground was purchased from new landowner David McGrath. this enabled the club to begin its forward thinking and planning for the new Millennium. At the end of the 2000 season not only had the club moved into the realms of business plans and cabinet style committees but had managed to purchase land adjacent to the pitch, formerly known as the “football pitch”. With a lot of hard work and more dedication from members the hedge was removed. A small wicket area has now been laid for the Under 11 and Under 13 teams to play on. Also, a non-turf wicket has been laid. There are two practice artificial areas, One permenantly "Netted" and a open astroturf pitch.

In 2001 Thornton Cleveleys First XI won the Palace Shield Meyler Cup against local rivals Norcross, and continued the momentum to Win the coverted Palace Shield in 2002. In more recent times the re-formed Forth XI have won the Fylde League and Stuart Cup in 2007 before being accepted into the Palace Shield, the First team to have Four teams in the Saturday Competition. 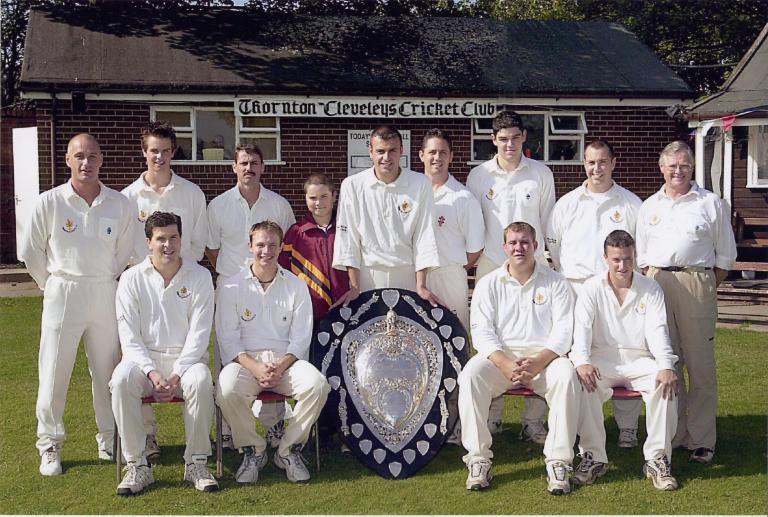 In 1957 when the club moved to the Illawalla ground, Tom Crelling set-up a Junior section which played friendly games against local schools and other clubs from the area. When the Palace Shield formed a junior section the club entered teams into all age groups - a sign of the amount of local children participating in cricket at the club. In 1980 the clubs Under 15 side lost the Lancashire Cricket Association Cup Final at Old Trafford off the last ball. This feat was repeated by the Under 13 team in 1986. With two success in the Palace Shield's Junior Flagship competition, the Rose Trophy, and many appearances in age group finals and semi-finals the club has rightly become exceedingly proud of its Junior section. Many players have progressed through into the senior teams to the 1st XI and the club is proud to boast of numerous players that have represented their county in a wide range of age groups. Who knows with more dedication and support maybe the future England captain could be blooded at Illawalla!?!

Their Ladies section is second to none in the Palace Shield, consistently providing a high level of catering and on many a Saturday afternoon visiting players can be overheard stating “best teas in the league”. An achievement very much to be proud of. As in all amateur sport the club is very grateful to the committee members and helpers, past and present who have made the club the success it is today. Our aim is to carry on and provide the best cricket facilities in the Fylde.